27th September 2019
Congratulations to Vince McCulloch on winning the ‘Singles League’ tournament this year and commiserations to the runner up, Robert Cameron

19th September 2019
The delayed ‘Ladies Championship’ was played today in beautiful sunny weather and the eventual winner was Margaret Kelly who was playing Jo Hayden.
Many congratulations to Margaret on her 5th Championship win if I am correct. A terrific achievement.
Without taking away anything whatsoever away from Margaret’s victory, particular sympathy and commiserations must go to Jo Hayden who has been struggling with illness over the past few weeks and did well to compete in the final at all.
Congratulations also to the winners of the ‘Ladies Nominated Triples’, Lorraine Coyle, Gladys Brittain and Ena Breingan along with commiserations to the runners up, Linda Walls, Pauline Richmond and Jan lindsay.

17th September 2019
Results of Ladies’ Finals played today.
Mary Brannigan beat Margaret Kelly in the Clare Whannel competition and Ena Breingan partnered by skip Jo Hayden won the Nominated Pairs against Yvonne Grieve and Dorothy Young.
Congratulations as always to the winners and commiserations to the runners up.

8th September 2019
Congratulations to the winners of this year’s ‘Bill McIntosh Trophy’ who were Kenny Brooks, Cherie Bradley, Andy Anderson and junior skip from Cardonald, Eva Hazelton.
Commiserations to the runners up, Ina McLaughlin, Allan Lavetty, Bob Rooney and junior skip Daro McAllister who is from Arthurlie B.C.
Many thanks to all the juniors, both from our club and all the other clubs who took part and helped to make it a great day.

7th September 2019
Some nice sunny weather back today for a keenly contested the ‘Nominated Pairs’ final.
Congratulations to the winning pair of Mark Richmond and Ross Warrender along with commiserations to the runners up Bobby Woolley and Malky McGeachy.

4th September 2019
The ‘Middleton Triples’ final was played this evening and congratulations go to the winners Stuart Allen, Alex Little and Jim Craig who won by one shot over Robert Cameron, Grant Middleton and Derek Grieve.
Commiserations to the runners up.

25th August 2019
FINALS WEEKEND
Another scorching hot day and another pretty hot display from Grant Middleton who won the ‘President’s Trophy’ against Jim Whyte.
Commiserations to Jim. That’s Grant’s second final victory in two days and he is still in two more!!

21st August 2019
Two ladies finals played this evening and congratulations go to Anne Miller the winner of the ‘Margaret Jardine Trophy’ along with commiserations to the runner up Dorothy Collins.
Congratulations also to the winners of the ‘Balloted Pairs’, Violet Stewart and Mary Brannigan and commiserations to the runners up, Lilias Campbell and Margaret Hamilton.
Some pictures are here on the ‘Media Gallery’
The rest of tonight’s news saw Grant Middleton reach his fourth final this year when he won the ‘President’s’ semi final against Derek Grieve.
Four Finals in the same year! – surely that must be another record for Grant.
In one of the ‘Nominated Pairs’ semi finals which was also played tonight, Mark Richmond and Ross Warrender won against George Lorimer and Eddie Waltham.
DON’T FORGET – FINALS WEEKEND – SAT/SUN 24th AND 25th AUGUST.

18th August 2019
Congratulations to the winners of this year’s ‘Willie Milne’ tournament ( surprised that they managed to stay sober enough for that length of time! ) – David Elliot, Grant Middleton, Derek Grieve and Ross Warrender.
Commiserations to the runners up – George Jamieson, George Carmichael, Sean Cargill and Vince McCulloch.
Thanks as always to everyone who took part and all those in ‘Rena’s Kitchen

14th August 2019
Congratulations to the winners of our Ladies’ Outing to Spittalmyre BC yesterday seen here holding the trophies made from Chris Patterson’s bowls.
The second photo shows our Triples receiving their West Semifinalists medals. These were not available at the time and that’s why they are only receiving them now.
(Thanks to Sheila McLaren for the update)

24th July 2019
Well done to all our players who reached the Bowls Scotland National Championship this week.
Unfortunately we were unable to repeat the success of last year.
David Elliot in the ‘Gent’s Singles ‘ was our only player to reach the second round of competition before being knocked out.
It’s worth remembering just how difficult it is to get to these finals and how tough the opposition is when you get there.!

6th July 2019
Belated congratulations to the winners of this year’s ‘Mixed Triples’ tournament who were
Jim Hamilton, Morag McLintock and Stuart Allen.
Commiserations to the runners up – Cathy Brooks, Annette Garrick and Ian Collins.

9th June 2019
Congratulations to all our teams who played in the ‘Bowls Scotland’ District Finals and made it through to the ‘Scottish Championship’ at Northfield in July.
Subject to confirmation David Elliot is through in the ‘Gent’s Singles’ along with Gladys Brittain in the ‘Ladies Over 55’s’
Joining them are the ‘Ladies Fours’ and ‘Gent’s Fours’ teams of
Sheila McLaren, Margaret Causer, Elizabeth Farquhar and Mary Brannigan along with
Grant Middleton, Mark Richmond, Ross Warrender and Jim Craig.
Congratulations also to all the other club teams who made it through and commiserations to all the gallant runners up.
A huge vote of thanks for the enormous amount of work done by all our volunteers who contributed in so many ways ( Markers, Bar Staff, Kitchen, Organisation ) in making this such a successful day for our club.
Apologies for any errors which I am sure will be rectified in due course.
1st June 2019
Pleasant weather today for the ‘Gent’s Triples Day’ after the heavy rain over the past few days.
Congratulations go the winning team of Stuart Allen, Alex Little and Jim Craig and commiserations to the runners up, Robert Armstrong, Hugh Madden and John Madden.
31st May 2019
Our Ladies Helen Robinson Invitation Triples was played on Friday 31 May.
Sadly due to the rain we only played half the normal number of games and stopped at lunchtime.
Despite this all the ladies were good natured about being so wet – and four teams managed to win all three of their games.
On a count back of shots the runners-up were a team from Shanks (M Taylor, J Geddes and J McKenzie) and the winners (again!) were
Hillington (Sandra Kerr, Helen Parrott and Norma Hood). Congratulations to them all.
Unfortunately due to the early finish, the family representatives of Helen Robinson were unable to attend so the trophy was presented by our Ladies President, Mary Brannigan. 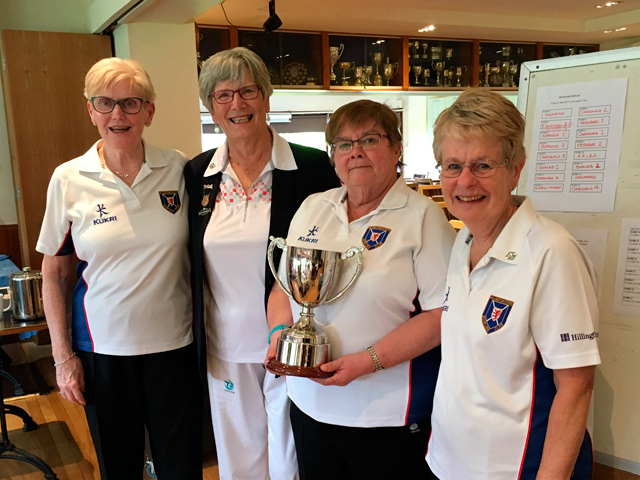 Thanks to Anne Miller for the report and picture.
11th May 2019
A total of fourteen teams played in the Mixed Jubilee Game this afternoon in pleasant sunshine.
Runners up Jo Hayden, Jane O’Brien, Kenny Brooks and Jim McGowan.
Winners Ian Collins, Jim Syme, David Conway and Isobel Dougan Yeates. 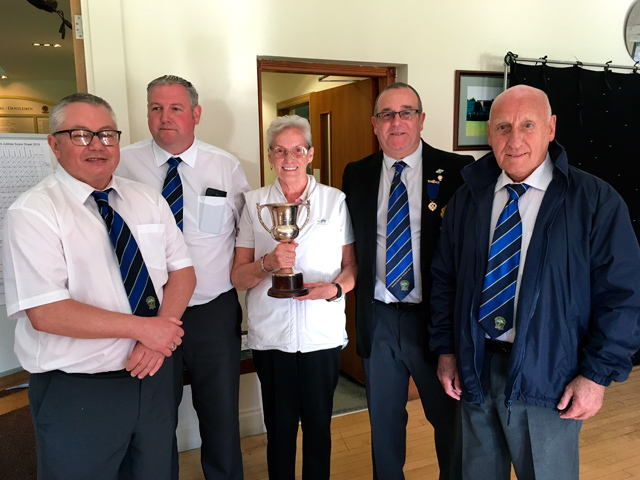 Thanks to Anne Miller for the report and picture.
3rd May 2019
Super Sub Alex ‘Tattie’ Marshall drops by with a few bowling tips for our Algarve tourists. 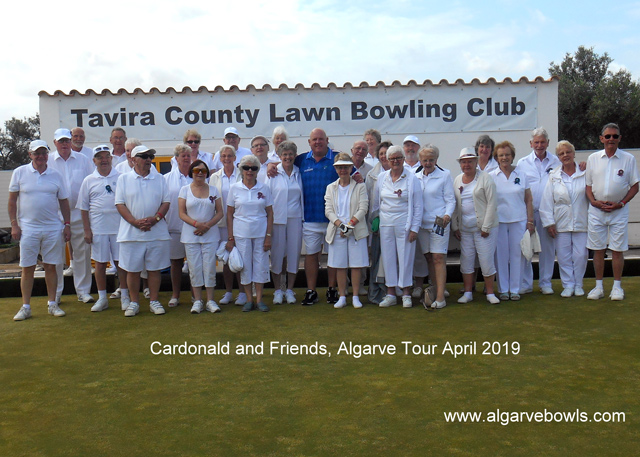 28th April 2019
Our two newest members both lost their respective ‘Championship’ ties today.
No one could tell me their names but rumour has it that they are Donald and Daphne (Daffy for short),
and they were both out for a DUCK!! 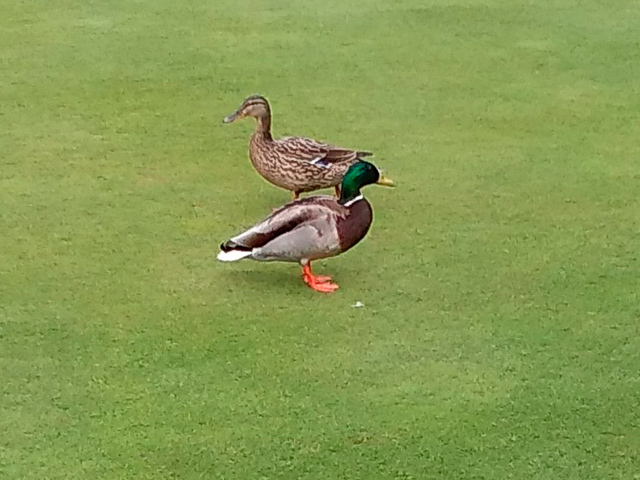 Picture – Courtesy of Iain Milne
26th April 2019
The Ladies played their Balloted Triples today
The weather was not great but good food, fellowship and bowling more than made up for it.
Runners up were Linda Walls, Jane O’Brien and Margaret Kelly.
Winners were Lorraine Coyle, Anne Miller and Jo Hayden.
( Anne Miller ) 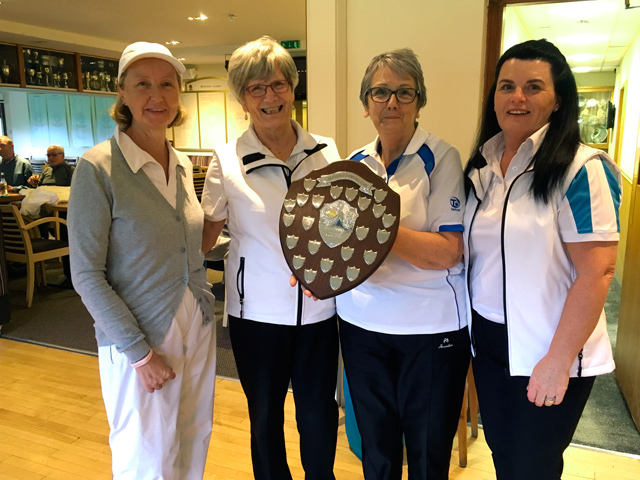